Giving Back to the Community

“Giving Back to the Community” has been a signature charitable act of kindness and helping out the community we live in, spearheaded by the FCAWI Seniors Wisdom 50 Plus.

Collection of non-perishable foods benefitted the Sun Youth of Montreal in time for Christmas, 2011. 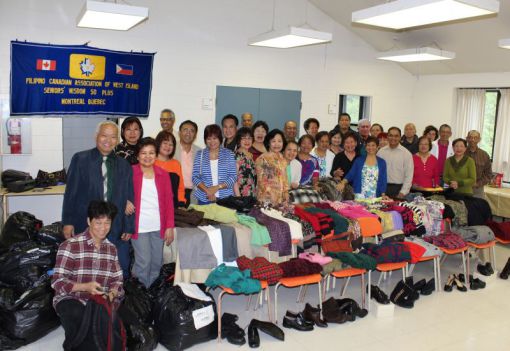 Collection of new/used clothing, shoes, purses, etc. was FCAWI Seniors’ “Giving Back to the Community” undertaking in December, 2012.  Beneficiary this time was the Fonds d’Aide de l’ouest de l’île (West Island Assistance Fund).  A considerable collection was put together for a truck pick-up.

Giving Back to the Community 2013 was concentrated to the victims of the Haiyan typhoon, the strongest storm in recorded history that struck the Philippines on November 8, 2013 . More than 6,000 deaths, some 27,000 injured and over 3.9 million people were forced out from their homes. FCAWI raised more than $6,000 which was equally matched by the Federal Government and was sent thru Canadian Red Cross. 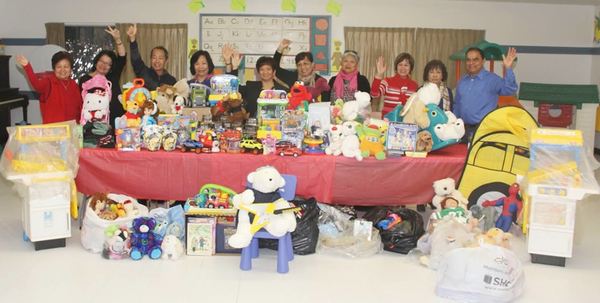 Collection of Children's toys for Christmas was the theme for 2014 FCAWI's "Giving Back to the Community."  FCAWI partnered with On Rock Community Services based in Roxboro.  See more pictures in Photo Gallery.

We are a non-profit organization and welcome any kind of support. If you would like to help out, please contact us for a list of our most needed items or volunteer opportunities.

PLEASE NOTE THAT WE HAVE RESUMED OUR ZUMBA ACTIVITY AT THE LAKEROAD CHALET IN DDO, CORNER LAKEROAD & HEMMINGWAY. Please see ad on Upcoming Events.

Please see the Upcoming events for all of our planned activities.

Thank you to all our volunteers!

Welcome. Join us to work toward improving our community. We can't wait to meet you all during our upcoming projects.

Check our Photo Gallery for pictures of our latest events.

Get Social with Us